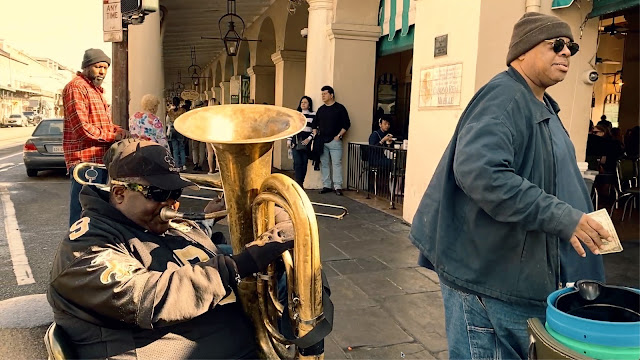 Basin Street is the street

Where the best folks they meet

In New Orleans, land of dreams

Exactly what it really means

Basin Street Blues is another New Orleans jazz standard with a fascinating back story.

The song was composed by Spencer Williams and originally recorded by Louis Armstrong – two New Orleanians who grew up on and around Basin Street. However, when the song was recorded in 1928, the street no longer existed. City leaders, anxious to erase the area’s reputation for legal prostitution, had changed the street’s name to the innocuous “North Saratoga.”

Because of the song’s popularity, the city changed the name back to Basin Street. But by that point, the Storyville legacy was long gone and the street really wasn’t a place for tourists to visit.

As often happens with great songs, the lyrics are malleable.  https://sweeneygumbo.com/2016/04/13/going-beyond-the-lyrics-in-basin-street-blues/

I do not own the copyright to the music.  (Images and recording on this video were captured as is. Copyright 2022 Rob Castro.) This video is posted for educational use under Section 17 U.S. Code § 107. Limitations on exclusive rights: Fair use.

Some remastering was applied to make the performance cut through within the confines of  the loudness wars.