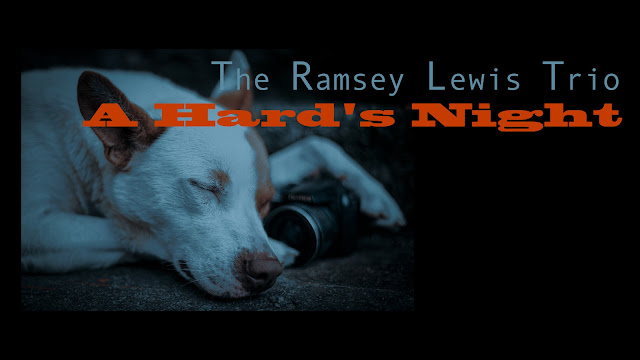 "None of us wanted to be the bass player. In our minds he was the fat guy who always played at the back." - Paul McCartney

The song is from the vinyl LP  "Hang on Ramsey!", recorded live at the Lighthouse in Hermosa Beach, California on October 14-17, 1965.  Background vocals were from audience participation who were obviously having a great time.

The Ramsey Lewis Trio, with bassist Eldee Young and percussionist Redd Holt, became a fixture on the Chicago jazz scene, releasing their debut album, Ramsey Lewis & His Gentlemen of Jazz, back in 1956.

Lewis earned his first gold record, as well as a Grammy award for Best Jazz Performance, for their swinging version of Dobie Gray’s hit “The In Crowd.”  He returned to the pop charts in 1966 with versions of "A Hard's Night", “Hang On Sloopy” and “Wade In The Water.” Throughout the years, Lewis’ trio has undergone membership changes, all the while staying true to Lewis’ high musical standards.

I do not own the copyright to the music, the recording and the photos.  (Image post and video art were appropriated from Marcelo Chagas.) This video is posted for educational use under Section 17 U.S. Code § 107. Limitations on exclusive rights: Fair use.