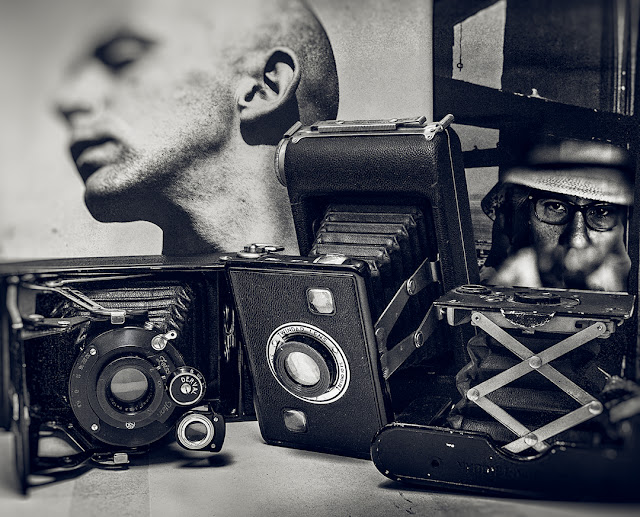 Somehow this fell into the crack. I started the Icons Behind the Lens Series some time ago and I thought I have posted all the images for the series. This one never made it. It's a bit of a dark horse so maybe it was meant to be unnoticed. Until now.

These are my folding cameras. One of them is a Kodak Jiffy, a real gem that came out in the 30s. Sorry, but I can't remember which one is it now. They all still work. Somewhat. Depends of what work means. It's operable but has to be used with some compensation. For instance, the leaf shutter is slow. Which means that if I metered at 1/60, I probably have to set the camera at 1/125 to compensate for the shutter delay. Fortunately, film is very forgiving. Especially, if one uses professional films like Kodak Tri-X or Ilford HP5. Both are my go-to films.

The image on the left was taken by Edward Weston. Quite a bit of material has been written about Weston so I am going to skip him and go to Juzno, who captured a self-portrait on the right. Not much I think is known about him. Juzno was an Alien living in Mars in 1950s. When he came to the US, his eye for the bizarre in cosmopolitan Out-of-this-worldly prepared him to capture the odd, the morbid and the freakish as he examined the culture of that day.