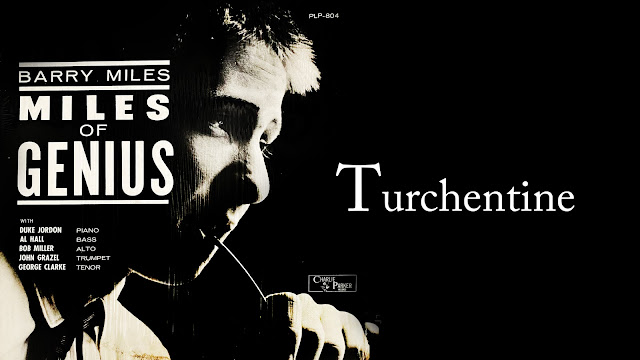 "You can tell more about a person by what he says about others than you can by what others say about him." - Audrey Hepburn From the 1966 vinyl album Miles of Genius Bass – Al Hall Drums – Barry Miles Piano – Duke Jordan Producer – Aubrey Mayhew Saxophone – George Clarke Sleeve Notes – Aubrey Mayhew, Woody Herman Trumpet – John Glasel Barry Miles (born March 28, 1947) is an American pianist, drummer, record producer, and author. While a student at Princeton University, Miles concentrated his efforts on his piano playing, recording a live album in 1966 entitled Barry Miles Presents His Syncretic Compositions. He applied the philosophical term "syncretic" to music, defining the process of melding any combination of musical influences and styles together in the improvisational jazz idiom with originality. The combination of Miles's early jazz influences, his early Rock and roll background from the late 1950s and early 1960s, and his innovative "melting pot of musical styles" concept, resulted in this recording. I do not own the copyright to the music, the recording and the photos. (Image post and video art were appropriated from the original album.) This video is posted for educational use under Section 17 U.S. Code § 107. Limitations on exclusive rights: Fair use. As much as possible, I attempted to remove most of the pops and crackles from the original vinyl album. Hope you enjoy. INXDS. #bebop #jazz #vinylrecord #quoteoftheday