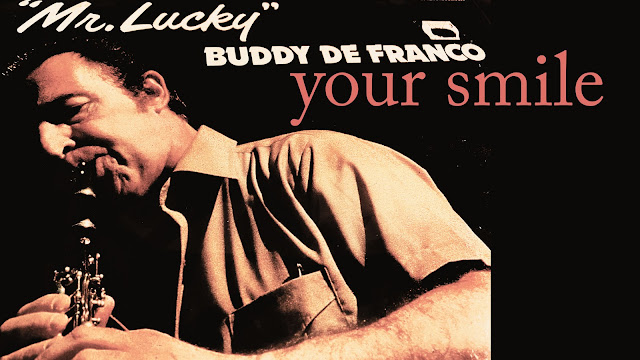 "Wise men speak because they have something to say; Fools because they have to say something." - Plato From the vinyl album Mr Lucky released in 1982 on Pablo. Credits: Bass – George Duvivier Clarinet – Buddy De Franco Drums – Ronnie Bedford Guitar – Joe Cohn Layout, Design – Norman Granz, Sheldon Marks Photography By – Tom Copi Piano – Albert Dailey Producer – Joyce DeFranco Producer, Liner Notes – Buddy DeFranco Boniface Ferdinand Leonard "Buddy" DeFranco (February 17, 1923 – December 24, 2014). An Italian-American jazz clarinetist. In addition to his work as a bandleader, DeFranco led the Glenn Miller Orchestra under the name, "The World Famous Glenn Miller Orchestra, Directed By Buddy DeFranco" for almost a decade in the 1960s and '70s. He began his professional career just as swing music and big bands—many of which were led by clarinetists like Artie Shaw, and Benny Goodman—were in decline. While most jazz clarinet players did not adapt to this change, DeFranco successfully continued to play clarinet exclusively, and was one of the few bebop clarinetists. He also performed with Gene Krupa, Art Blakey, Tommy Dorsey, Count Basie, Charlie Barnet, Art Tatum, Oscar Peterson, Lennie Tristano, Dodo Marmarosa, Terry Gibbs, Charlie Parker, Dizzy Gillespie, Miles Davis, Eddie Daniels, Putte Wickman, Billie Holiday and many others, and released dozens of albums as a leader. I do not own the copyright to the music, the recording and the photos. (Image post and video art were appropriated from the original album.) This video is posted for educational use under Section 17 U.S. Code § 107. Limitations on exclusive rights: Fair use. As much as possible, I attempted to remove most of the pops and crackles from the original vinyl album. Hope you enjoy. INXDS. #bebop #jazz #vinylrecord