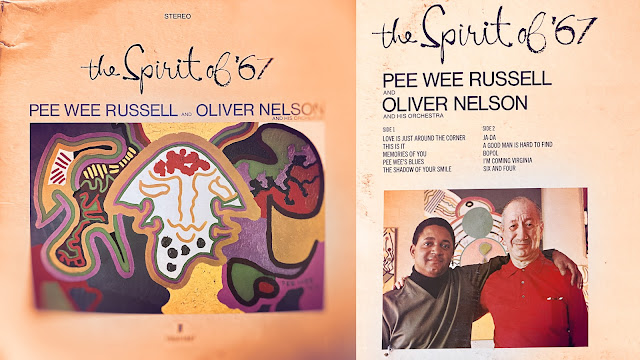 The Spirit of '67 is an album by American jazz clarinetist Pee Wee Russell and composer/arranger Oliver Nelson featuring performances recorded in 1967 for the Impulse! label. "Love Is Just Around the Corner" (Louis Gensler, Leo Robin) - 2:50 • Pee Wee Russell - clarinet • Oliver Nelson - arranger, conductor • Clark Terry, Joe Wilder, Ed Williams, Snooky Young - trumpet • Jimmy Cleveland, Urbie Green, Dick Hixson - trombone • Tony Studd - bass trombone • Phil Woods, Jerry Dodgion - alto saxophone • Frank Wess, Bob Ashton - tenor saxophone • Danny Bank - baritone saxophone, bass clarinet • Hank Jones - piano • Howard Collins - guitar • George Duvivier - bass • Grady Tate - drums Charles Ellsworth "Pee Wee" Russell (March 27, 1906 – February 15, 1969), was a jazz musician. Early in his career he played clarinet and saxophones, but he eventually focused solely on clarinet. Russell began his career playing Dixieland jazz, but throughout his career incorporated elements of newer developments such as swing, bebop and free jazz. In 1987, Pee Wee Russell was inducted into the Big Band and Jazz Hall of Fame. Oliver Edward Nelson (June 4, 1932 – October 28, 1975) was an American jazz saxophonist, clarinetist, arranger, composer, and bandleader. He also played on the West Coast briefly with the Louie Bellson big band in 1959, and in the same year began recording for Prestige Records as the leader of various small groups. From 1960 to 1961, he briefly played with Count Basie and Duke Ellington, and then joined the Quincy Jones big band playing tenor saxophone, both in the U.S. and on tour in Europe. I do not own the copyright to the music, the recording and the photos. (Image post and video art were appropriated from the album. ) This video is posted for educational use under Section 17 U.S. Code § 107. Limitations on exclusive rights: Fair use. As much as possible, I attempted to remove most of the pops and crackles from the original vinyl album. Hope you enjoy. INXDS. #bebop #jazzclarintet #vinylrecord