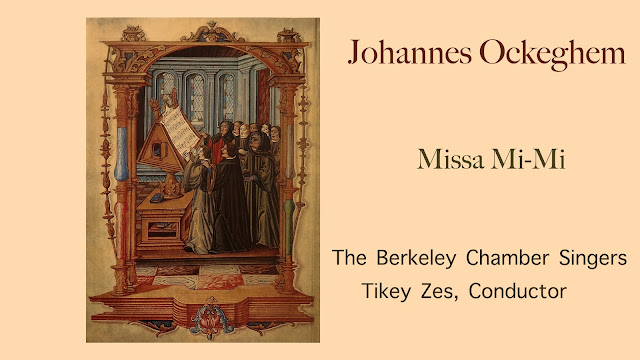 Johannes Ockeghem / Berkeley Chamber Singers – Missa Mi-Mi (restored 1966 vinyl LP)
The Missa Mi-mi is a musical setting of the Ordinary of the Mass by Johannes Ockeghem. It is a motto mass based on one of Ockeghem's own chansons, "Presque transi." The mass contains several motives and ideas from this chanson beyond just the head-motive. Earlier scholars generally assumed that 'Mi-mi' referred to the opening bass motive, which would involve the solmization syllables 'mi' and 'mi' in the normal and soft hexachord, respectively. Johannes Ockeghem (also Jean de, Jan; surname Okeghem, Ogkegum, Okchem, Hocquegam, Ockegham; 1410/1425 – 6 February 1497) was the most famous composer of the Franco-Flemish School in the last half of the 15th century. Ockeghem was born in the village of St. Ghislain (near Mons, Belgium) in the diocese of Cambrai. The first appearance of Johannes Ockeghem in the surviving records is the year (1443-1444) that he spent as a vicaire-chanteur (an adult singer in the cathedral choir) at Notre Dame in Antwerp. Two years later he was singing in the chapel of Charles I, duke of Bourbon The Berkeley Community Chamber Singers (BCCS) is an a cappella group of 16–32 singers that serves as the outreach arm for BCCO. BCCS sings a varied repertoire of madrigals, gospel, pop songs, and spirituals and performs at diverse venues, such as senior residences, hospitals, and homeless shelters. Choir – Berkeley Chamber Singers Composed By – Johannes Ockeghem Conductor – Tikey Zes Ensemble – Wollitz Recorder Group Recorder – Kenneth Wollitz I do not own the copyright to the music, the recording and the photos. Image post and video art were appropriated from Cantakukuruz: Ockeghem with the singers of the royal chapel, miniature from 1523, in the manuscript of an award-winning poem (Ms. fr.1537 fol. 58v of the Bibliothèque Nationale, Paris), licensed under the Creative Commons Attribution-Share Alike 4.0 International license. This video is posted for educational use under Section 17 U.S. Code § 107. Limitations on exclusive rights: Fair use. As much as possible, I attempted to remove most of the pops and crackles from the original vinyl album. I also remastered the sound to be able to compete with most current preferences for listening to modern music. Hope you enjoy. INXDS. #classicalmusic #acapella #vinylrecord
Email ThisBlogThis!Share to TwitterShare to FacebookShare to Pinterest
Labels: appropriation, classical music, vinyl record
Newer Post Older Post Home