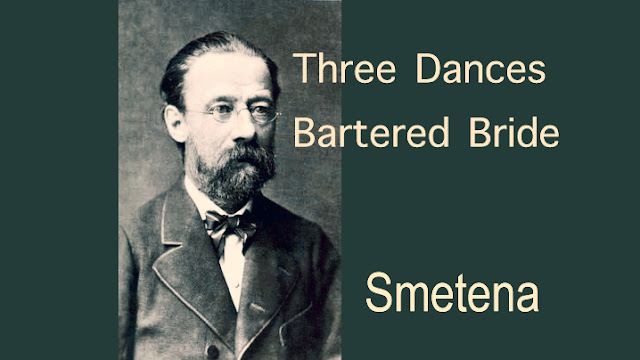 "I'm crazy, but I'm not stupid." - Jackie Chan The Bartered Bride (Czech: Prodaná nevěsta, The Sold Bride) is a comic opera in three acts by the Czech composer Bedřich Smetana, to a libretto by Karel Sabina. The work is generally regarded as a major contribution towards the development of Czech music. It was composed during the period 1863 to 1866, and first performed at the Provisional Theatre, Prague, on 30 May 1866 in a two-act format with spoken dialogue. Set in a country village and with realistic characters, it tells the story of how, after a late surprise revelation, true love prevails over the combined efforts of ambitious parents and a scheming marriage broker. The opera was not immediately successful, and was revised and extended in the following four years. In its final version, premiered in 1870, it rapidly gained popularity and eventually became a worldwide success. Bedřich Smetana (/ˌbɛdərʒɪx ˈsmɛtənə/ BED-ər-zhikh SMET-ə-nə, Czech: [ˈbɛdr̝ɪx ˈsmɛtana] (About this soundlisten); 2 March 1824 – 12 May 1884) was a Czech composer who pioneered the development of a musical style that became closely identified with his people's aspirations to a cultural and political "revival." He has been regarded in his homeland as the father of Czech music. Internationally he is best known for his opera The Bartered Bride and for the symphonic cycle Má vlast ("My Fatherland"), which portrays the history, legends and landscape of the composer's native Bohemia.

The music is performed by Cleveland Orchestra, George Szell conducting.

I do not own the copyright to the music, the recording and the photos. (Image post and video art were appropriated from the photo, which is in public domain in the United States because it was published (or registered with the U.S. Copyright Office) before January 1, 1926..) This video is posted for educational use under Section 17 U.S. Code § 107. Limitations on exclusive rights: Fair use. As much as possible, I attempted to remove most of the pops and crackles from the original vinyl album. I also remastered the sound to be able to compete with most current preferences for listening to modern music. Hope you enjoy. INXDS. #classicalmusic #vinylrecord #quoteoftheday