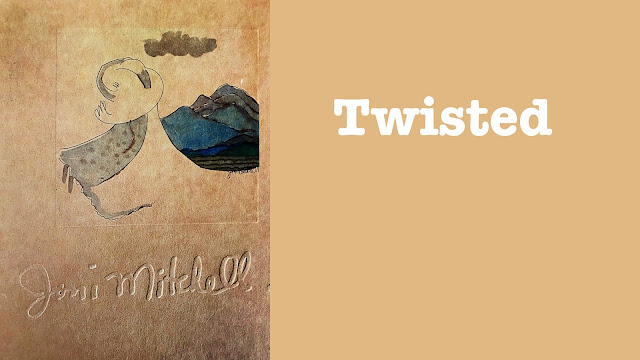 "Whatever you think can't be done, somebody will come along and do it. A genius is the one most like himself." - Thelonious Monk

From the LP, Court and Spark is the sixth studio album by Canadian singer-songwriter Joni Mitchell. It was an immediate commercial and critical success—and remains her most successful album. Released in January 1974, it has been described as pop, but also infuses Mitchell's folk rock style, which she had developed through her previous five albums, with jazz inflections.

It reached No. 2 in the United States and No. 1 in Canada and eventually received a double platinum certification by the RIAA, the highest of Mitchell's career. It also reached the Top 20 in the UK and was voted the best album of the year for 1974 in The Village Voice Pazz & Jop Critics Poll. In 2003 it was listed at No. 111 in Rolling Stone's 500 Greatest Albums of All Time.

The album saw Mitchell’s collaborations with Henry Lewy, Wilton Felder, Tom Scott, Dave Crosby and Graham Nash. Generally, always in control of the production of her own albums, Mitchell co-produced this one with Lewy. The co-founder of the popular L.A. jazz group The Crusaders, Felder contributed some memorable basslines to the album while the Blues Brothers member Scott infused some lush saxophone. Crosby and Nash’s presence tends to be overlooked as their backing vocals in ‘A Freeman In Paris’ blends effortlessly with Mitchell’s voice. (https://faroutmagazine.co.uk/joni-mitchell-court-and-sparks-alternative-freedom-and-love/ )

The song "Twisted" is a 1952 vocalese song with lyrics by Annie Ross, set to a tenor saxophone solo of the same name by Wardell Gray that was recorded in 1949. It has been covered by Bette Midler, and on this post Joni Mitchell.

My analyst told me
That I was right out of my head
The way he described it
He said I'd be better dead than alive
I didn't listen to his jive
I knew all along
That he was all wrong
And I knew that he thought
I was crazy but I'm not
Don't know
My analyst told me
That I was right out of my head
He said I need treatment
But I'm not that easily led
He said I was the type
That was most inclined
When out of his sight
To be out of my mind
And he thought I was nuts
No more ifs or ands or buts
They say as a child
I appeared a little bit wild
With all my crazy ideas
But I knew what was happening
I knew I was a genius...
What's so strange when you know
That you're a wizard at three
I knew that this was meant to be
Now I heard little children
Were supposed to sleep tight
That's why I got into the vodka one night
My parents got frantic
Didn't know what to do
But I saw some crazy scenes
Before I came to
ow do you think I was crazy
I may have been only three
But I was swinging
They all laugh at angry young men
They all laughed at Edison
|And also at Einstein
So why should I be sorry I
f they just couldn't understand
The idiomatic logic
That went on in my head
I had a brain It was insane
Oh they used to laugh at me
When I refused to ride
On those double decker buses
All because there was no driver on the top
My analyst told me
That I was right out of my head
But I said dear doctor
I think that it's you instead
Because I, I got a thing
That's unique and new
To prove it I'll have
The last laugh on you
'Cause instead of one head
I got two
And you know two heads are better than one.

Roberta Joan "Joni" Mitchell CC (née Anderson; born November 7, 1943) is a Canadian singer-songwriter. Drawing from folk, pop, rock, classical, and jazz, Mitchell's songs often reflect on social and philosophical ideals as well as her feelings about romance, womanhood, disillusionment, and joy. She has received many accolades, including nine Grammy Awards and induction into the Rock and Roll Hall of Fame in 1997. Rolling Stone called her "one of the greatest songwriters ever", and AllMusic has stated, "When the dust settles, Joni Mitchell may stand as the most important and influential female recording artist of the late 20th century".

I do not own the copyright to the music, the recording and the photos. (Image post and video art were appropriated from the original album.) This video is posted for educational use under Section 17 U.S. Code § 107. Limitations on exclusive rights: Fair use. As much as possible, I attempted to remove most of the pops and crackles from the original vinyl album. Hope you enjoy.