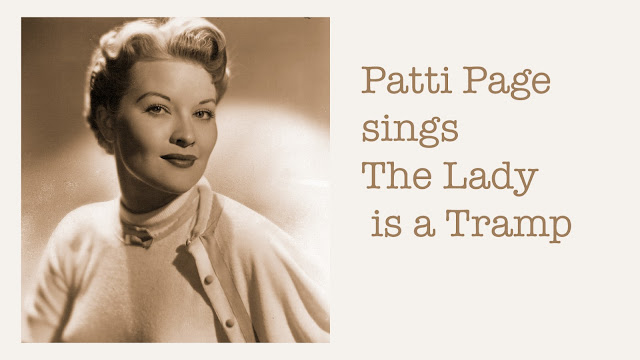 "The secret of getting ahead is getting started." - Mark Twain

The Lady is a Tramp (Verse)

I've wined and dined on mulligan stew
And never wished for turkey
As I hitched and hiked and drifted, too
From Maine to Albuquerque
Alas, I missed the Beaux Arts Ball
And what is twice as sad
I was never at a party where they honored Noel Ca'ad
But social circles spin too fast for me
My hobohemia is the place to be (Chorus)
I get too hungry for dinner at eight I like the theater, but never come late
I never bother with people I hate
That's why the lady is a tramp
I don't like crap games with barons and earls
Won't go to Harlem in ermine and pearls
Don't dish the dirt with the rest of the girls
That's why the lady is a tramp
I like the free, fresh wind in my hair
Life without care I'm broke
It's oke
Hate California, it's cold and it's damp
That's why the lady is a tramp

Rodgers and Hart wrote "The Lady Is a Tramp" specifically for their lead, the energetic teenage movie star Mitzi Green, who introduced it in the show. Some have thought the song is a little too "worldly" for a kid to sing, but that didn't stop it from becoming, at the time and against a lot of terrific competition, the show's biggest hit.

If you search the web for female singers covering "The Lady Is a Tramp”, you might not find Patti Page on the first few results. Surprisingly, you might even see Lady Gaga, Peggy Lee or even Ella Fitzgerald but not Ms Page.

Clara Ann Fowler (November 8, 1927 – January 1, 2013), known by her stage name Patti Page, was an American singer of pop and country music and occasional actress. She was the top-charting female vocalist and best-selling female artist of the 1950s, selling over 100 million records during a six-decade long career. She was often introduced as "the Singin' Rage, Miss Patti Page".

On this recording, Ms page comes blazing out in straight jazz style, carried along on the accompaniment provided by Pete Rugolo and a band loaded with top jazz names as Bob Cooper on oboe, George Auld on tenor sax, Chico Alvarez and Buddy Childers on trumpet. The trumpet that burst through in the solo is played by Pete Condoli.

I do not own the copyright to the music, the recording and the photos. (Image post and video art are from the publicity photo of Patti Page, General Artist Corporation-management/photographer-James Kriegsmann, New York. The photo is in the public domain in the United States because it was published in the United States between 1926 and 1977, inclusive, without a copyright notice.) This video is posted for educational use under Section 17 U.S. Code § 107. Limitations on exclusive rights: Fair use.