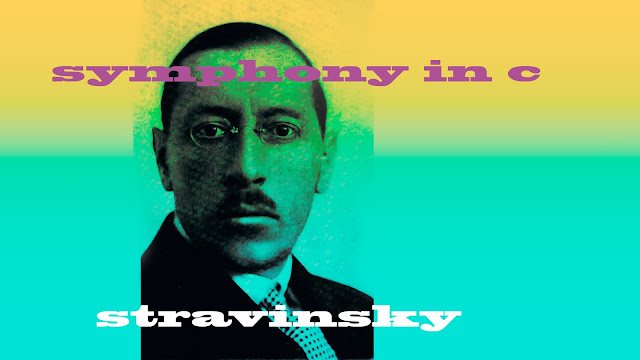 Stravinsky Conducts Symphony in C (The CBC Symphony Orchestra) My first exposure to Stravinsky was watching Disney’s Fantasia with our daughter Kamilah when she was little. It’s a 1940 film animation by Walt Disney, bringing to life his vision of blending animated imagery with classical music.  We had the film on VHS and Kamilah probably played it hundreds of times. One of the scenes was a visual history of Disney’s depiction of earth’s beginnings to the tune of Igor Stravinsky’s Rite of Spring. Back then, my ears were not appreciative of classical music. Decades later, I stumbled into a used vinyl LP which had a recording of Stravinsky conducting his Symphony in C. Perhaps not as popular as Rite of Spring, but nonetheless a wonderful musical piece. The Tragedy Behind Composing Symphony in C: In the liner note of the LP, Stravinsky laments, “… it reminds me of the most tragic year of my life.” He contracted tuberculosis in 1937 but continued to write the symphony. His wife Catherine, and two daughters Mika and Milena were already seriously ill with the same disease. A year later, his daughter Mika died. After three months, his wife Catherine died. Stravinsky writes, “I did not seek to overcome my grief by portraying or giving expression to it in music, and you will listen in vain, I think, for traces of this sort of personal emotion.” A Few Things We Know About the Composer: Igor Fyodorovich Stravinsky (17 June 1882 - 6 April 1971) was a Russian composer, pianist and conductor. Stravinsky's compositional career was notable for its stylistic diversity. He first achieved international fame with three ballets commissioned by the impresario Serge Diaghilev and first performed in Paris by Diaghilev's Ballets Russes: The Firebird (1910), Petrushka (1911), and The Rite of Spring (1913). The last transformed the way in which subsequent composers thought about rhythmic structure and was largely responsible for Stravinsky's enduring reputation as a revolutionary who pushed the boundaries of musical design. Disclaimer: I do not own the copyright to the music, the recording and the photos. (The artwork was appropriated from "Miniature essays: Igor Stravinsky", photographed by Robert Regassi. This media file is in the public domain in the United States.) This video is posted for educational use under Section 17 U.S. Code § 107. Limitations on exclusive rights: Fair use. As much as possible, I attempted to remove most of the pops and crackles from the original vinyl album. I also remastered the sound to be able to compete with most current preferences for listening to modern music. Hope you enjoy. INXDS.