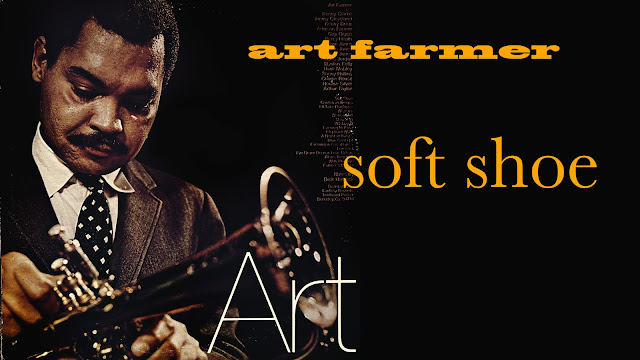 “For I do not seek to understand in order that I may believe, but I believe in order to understand." - Anselm of Canterbury Arthur Stewart Farmer (August 21, 1928 – October 4, 1999) was an American jazz trumpeter and flugelhorn player. He also played flumpet, a trumpet–flugelhorn combination especially designed for him. He and his identical twin brother, double bassist Addison Farmer, started playing professionally while in high school. Art gained greater attention after the release of a recording of his composition "Farmer's Market" in 1952. He subsequently moved from Los Angeles to New York, where he performed and recorded with musicians such as Horace Silver, Sonny Rollins, and Gigi Gryce and became known principally as a bebop player. Farmer's Market is an album by trumpeter Art Farmer, featuring performances recorded in 1956 and released on the New Jazz label. • Art Farmer – trumpet • Hank Mobley – tenor saxophone • Kenny Drew – piano • Addison Farmer – bass • Elvin Jones – drums The Allmusic review stated: "Considering this is early period Farmer, and that his work after leaving the U.S. for Europe led him to playing the softer toned flugelhorn and trumpet exclusively, it is an important document in his legacy, comparing favorably alongside peers Clifford Brown, Miles Davis, and an also emerging Donald Byrd." I do not own the copyright to the music, the recording and the photos. (Image post and video art were appropriated from the original album.) This video is posted for educational use under Section 17 U.S. Code § 107. Limitations on exclusive rights: Fair use. As much as possible, I attempted to remove most of the pops and crackles from the original vinyl album. Hope you enjoy. INXDS. #bebop #jazz #vinylrecord #qouteoftheday