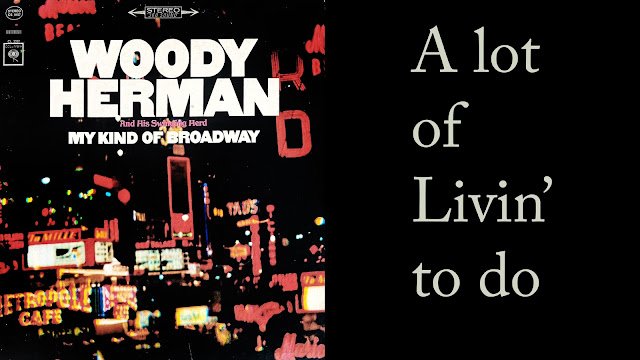 "When a thief kisses you, count your teeth." - Yiddish Saying From the 1965 album My Kind of Broadway. Based on the Broadway Bye Bye Birdie. Woody Herman, clarinet Andy McChee, tenor sax Don Radar, trumpet, arranger Bob Stroup, trombone Woodrow Charles Herman (May 16, 1913 – October 29, 1987) was an American jazz clarinetist, saxophonist, singer, and big band leader. His group "The Herd" founded in 1944 was heavily influenced by Duke Ellington and Count Basie. Bye Bye Birdie is a 1960 stage production. The story was inspired by the phenomenon of singer Elvis Presley being drafted into the United States Army in 1957. Conrad Birdie, a popular rock and roll star, receives an Army draft notice. New York–based songwriter Albert Peterson finds himself in trouble upon discovering his client Birdie, is drafted into the Army, leaving his heavily indebted firm in jeopardy. Albert's secretary, Rose "Rosie" Alvarez, comes up with a last-ditch publicity stunt to have Birdie record and perform a song before he is sent overseas. I do not own the copyright to the music, the recording and the photos. (Image post and video art were appropriated from the original album.) This video is posted for educational use under Section 17 U.S. Code § 107. Limitations on exclusive rights: Fair use. As much as possible, I attempted to remove most of the pops and crackles from the original vinyl album. Hope you enjoy. INXDS. #bebop #broadway #vinylrecord #qouteoftheday