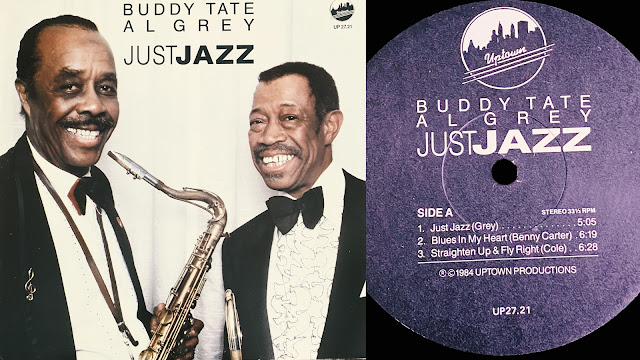 "Everybody wants to go to Heaven, but no one wants to die to get there!" - B. B. King Just Jazz, is an album by saxophonist Buddy Tate and trombonist Al Grey which was recorded in 1984 and released by the Uptown label. The album was reissued on CD with two alternate takes by Reservoir in 1989. On AllMusic Scott Yanow states, "Tenor-saxophonist Buddy Tate (who also contributes a bit of clarinet) blends in perfectly with trombonist Al Grey on this swinging quintet session ... Both Tate and Grey were in their late prime at the time". • Buddy Tate – tenor saxophone, clarinet • Al Grey – trombone • Richard Wyands – piano • Major Holley – double bass • Al Harewood – drums • Don Sickler - arranger Saxophonist Buddy Tate is a much finer soloist at age 72 than he was back then--capable of swinging you into bad health as he speaks through his horn with a rare, truthtelling soulfulness. Trombonist Al Grey makes a fine partner for him. A brash, struttingly confident virtuoso who has a welcome sense of humor, Grey is best known for his plunger work. I do not own the copyright to the music, the recording and the photos.  (Image post and video art were appropriated from the original album.) This video is posted for educational use under Section 17 U.S. Code § 107. Limitations on exclusive rights: Fair use. As much as possible, I attempted to remove most of the pops and crackles from the original vinyl album . Hope you enjoy.  INXDS #bebop #vinylrecord #quoteoftheday