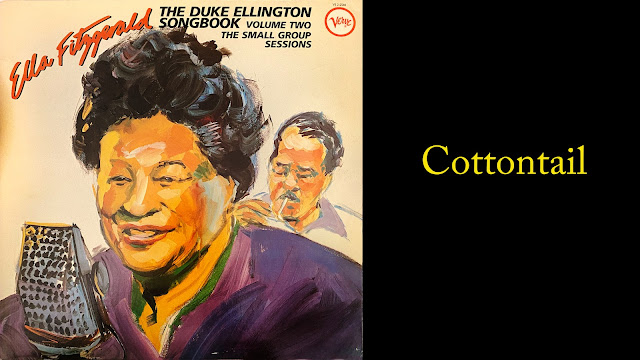 "There are two rules in life: Number 1 - Never quit. Number 2 - Never forget rule number 1." - Duke Ellington "Cotton Tail" is a 1940 composition by Duke Ellington. It is based on the rhythm changes from George Gershwin's "I Got Rhythm". The first Ellington recording (4 May 1940) is notable for the driving tenor saxophone solo by Ben Webster. Originally an instrumental, "Cotton Tail" later had lyrics written for it by Ellington. Ella Fitzgerald Sings the Duke Ellington Song Book is a 1957 studio album by the American jazz singer Ella Fitzgerald, accompanied by Duke Ellington and his orchestra, focusing on Ellington's songs. Part of Fitzgerald's "Song Book" series, it is the only one where the composer is also featured as a performer and the first occasion Fitzgerald recorded with Ellington. It is also the entry in the Song Book series that provided her with the most opportunities to exhibit her skill at scat singing. • Ella Fitzgerald – vocals • William "Cat" Anderson, Clark Terry, Willie Cook – trumpet • Dizzy Gillespie – trumpet on "Take the "A" Train" • Frank Foster – tenor saxophone • Paul Gonsalves, Ben Webster – saxophone • Johnny Hodges – alto saxophone • Russell Procope – clarinet, alto saxophone • Jimmy Hamilton – clarinet, tenor saxophone • Harry Carney – clarinet, bass clarinet • John Sanders, Britt Woodman, Quentin Jackson – trombone • Ray Nance – trumpet, violin • Stuff Smith – violin • Oscar Peterson, Paul Smith – piano • Ray Brown, Joe Mondragon, Jimmy Woode – double bass • Herb Ellis, Barney Kessel – guitar • Sam Woodyard, Alvin Stoller – drums • Billy Strayhorn – piano, narrator • Duke Ellington – piano, narrator, arranger, conductor I do not own the copyright to the music, the recording and the photos. (Image post and video art were appropriated from the original album.) This video is posted for educational use under Section 17 U.S. Code § 107. Limitations on exclusive rights: Fair use. As much as possible, I attempted to remove most of the pops and crackles from the original vinyl album. Hope you enjoy. INXDS. #bebop #scatsinging #vinylrecord #qouteoftheday