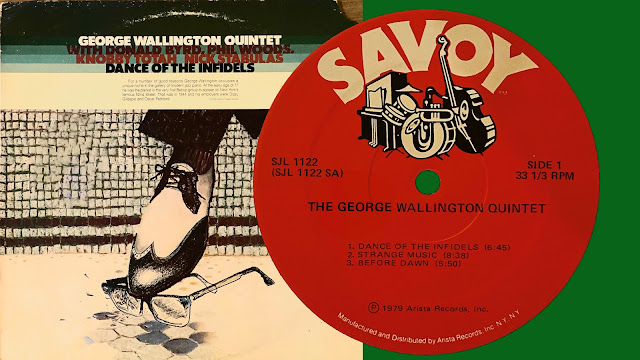 "When I am in the cellar of affliction, I look for the Lord's choicest wines." - Samuel Rutherford George Wallington (October 27, 1924, – February 15, 1993) was an American jazz pianist and composer. "Wallington first heard jazz on New York radio and listened to great players like Count Basie, Teddy Wilson and Jess Stacy. 'But it was hearing Lester Young with Basie that got me interested in jazz and made me want to learn the style. I started playing little clubs and dates with friends. Then I started playing around Greenwich Village and got a job at a club called George's where I played for Billie Holiday.' As he spread his net wider in the search for work he found himself playing opposite Liberace in Philadelphia. "Wallington was there when Charlie Parker first arrived from Kansas City. The combination of Parker and Dizzy Gillespie at that time in New York drew many young musicians into the crucible of bebop which they fired up. Wallington was one of the gifted young white pianists - the others were Al Haig and Dodo Marmarosa - who were able to get a grip on what was essentially a black music." [Excerpt From the Vaults) Bass – Knobby Totah Drums – Nick Stabulas Piano – George Wallington Saxophone [Alto] – Phil Woods Trumpet – Donald Byrd I do not own the copyright to the music, the recording and the photos. (Image post and video art were appropriated from the original album.) This video is posted for educational use under Section 17 U.S. Code § 107. Limitations on exclusive rights: Fair use. As much as possible, I attempted to remove most of the pops and crackles from the original vinyl album. Hope you enjoy. INXDS. #bebop #jazzpiano #vinylrecord #qouteoftheday