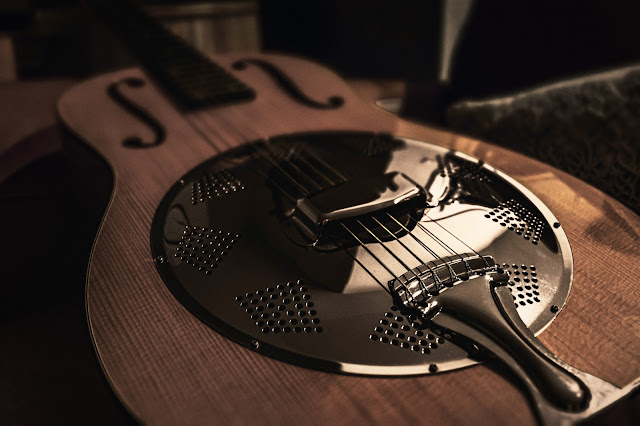 I'm more accustomed  to playing electric guitar.  But during the winter storm, power was down and the cell phone battery was low, so one of the ways I entertained the household was to go unplug.   This guitar is a Dobro style resonator that has a unique sound.  The roots of Dobro story can be traced to the 1920s when Slovak immigrant and instrument repairman/inventor John Dopyera and musician George Beauchamp were searching for more volume for his guitars. Dopyera built an ampliphonic (or "resonator") for Beauchamp.  Dobro is both a contraction of "Dopyera brothers" and a word meaning 'good' in their native Slovak.

Gibson currently owns the registered brand name Dobro.  So even though this guitar is usually referred to as a Dobro, it's actually manufactured by Regal.  This kind of model is no longer made - so in a sense it's unusual to see one play it in public.