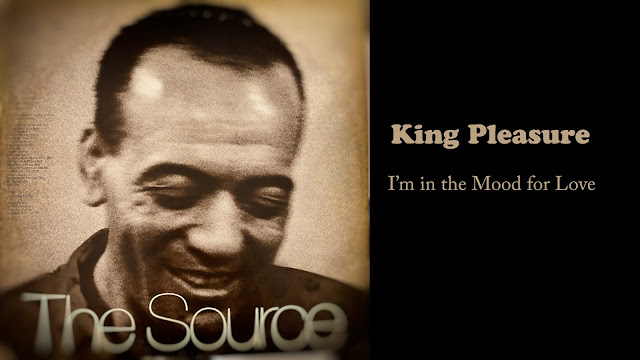 "Excuse me while I kiss the sky." - Jimi Hendrix King Pleasure (March 24, 1922 – March 21, 1982) was a jazz vocalist and an early master of vocalese, where a singer sings words to a famous instrumental solo. Born as Clarence Beeks in Oakdale, Tennessee, he moved to New York City in the mid-1940s working as a bartender and became a fan of bebop music. King Pleasure first achieved popularity by singing the Eddie Jefferson "Moody's Mood For Love", based on a 1949 James Moody improvised saxophone solo to "I'm in the Mood For Love". Eddie Jefferson wrote the lyrics to this improvisation, a practice known as vocalese. This particular arrangement of the song did not come to be known by its now common title of "Moody's Mood for Love" until King Pleasure released a very popular vocal version in 1954. Following King Pleasure's successful hit version, Jimmy McHugh, who wrote the music for "I'm in the Mood for Love", sued for copyright infringement and won a partial victory in court. Pleasure and Moody eventually agreed to share the proceeds on sales of any versions of the tune. King Pleasure's version included vocals by Blossom Dearie as well as instrumental contributions from Teacho Wiltshire. The song here - King Pleasure's I'm in the Mood for Love - recorded February 19, 1952 appears on the album The Source. King Pleasure, Blossom Dearie - vocals Merril Stepter - trumpet Lem Davis - alto sax Ray Abrams - tenor sax Cecil Payne - baritone sax Teach Wiltshire - piano Leonard Gaskin - bass Teddy Lee -drums I do not own the copyright to the music, the recording and the photos. (Image post and video art were appropriated from the original album.) This video is posted for educational use under Section 17 U.S. Code § 107. Limitations on exclusive rights: Fair use. As much as possible, I attempted to remove most of the pops and crackles from the original vinyl album. Hope you enjoy. INXDS. #bebop #vocalese #vinylrecord #qouteoftheday