B. B. King and his Lucilles 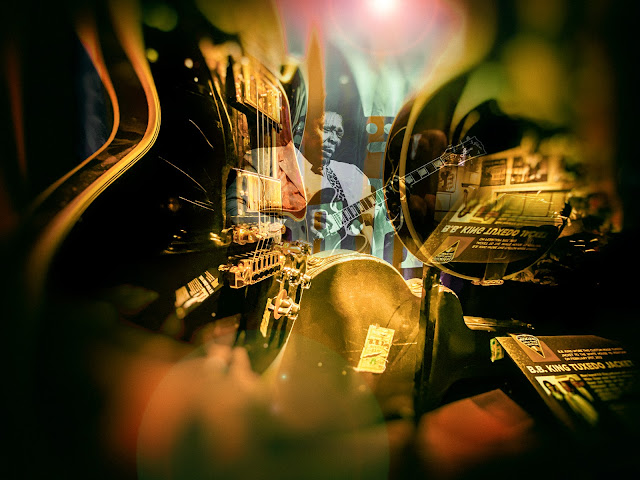 B. B. King - His real name is Riley B. King. B.B. stood for "Beale Street Blues Boy," a nickname he acquired after his radio DJ days in Memphis. King grew up on a tenant farm near Itta Bena, Mississippi, where he worked as a sharecropper picking cotton.

The image was taken at the Musicians Hall of Fame and Museum in Nashville, Tennessee.

For more than a half-century, the bluesman and Lucille have been virtually inseparable.  Lucille also serves as B.B. King’s voice, as much as the bluesman’s actual voice. “The minute I stop singing orally,” he once said, “I start to sing by playing Lucille.”

Lucille’s beginnings date to 1949, when King, then in his early 20s, was performing at a nightclub in Twist, Arkansas, in the dead of winter. To heat the cold room, King recalled, “they would take something that looked like a big garbage pail, half fill it with kerosene, light that fuel [and] set it in the middle of the dance floor.” All well and good, but on this night, a fight broke out between two men, and the pail was knocked over. “It spilled on the floor, it looked like a river fire,” the guitarist said. “And everyone started to run for the front door, including B.B. King.”

The blueseman managed to make it to safety outside — only to realize he had left his guitar behind. He raced back inside to retrieve it even as the wooden building, he said, “started to fall in around me.” The next day, he learned that two men had died in the blaze and that the fight that had set off the tragic chain of events had been over a woman who worked at the club. Her name was Lucille.

The original Lucille — the guitar King rescued that night in the fire — was an inexpensive, small-bodied Gibson L-30 archtop. The singer would go on to play a range of guitars over the ensuing years, attaching the Lucille name to each one. He was particularly drawn to Gibsons of the semi-hollow ES-335 model, such as the one displayed at the museum.